Kerrytown Concert House is delighted to welcome back to the House West Coast jazz singer, Melissa Morgan! She brings with her an impressive trio led by guitarist Randy Napoleon with bassist Jeff Pedraz and drummer, David Alvarez III.

“You have to check out this voice. It is interesting. It is sassy. It is sexy,” says producer John Clayton. Brought up in the jazz clubs of New York City, Melissa Morgan has a voice that is unexpected. From the exterior you would assume a sultry lounge singer, which does make an appearance once and awhile, but from inside she contains a powerful instrument. While you will always hear definitive influences from Nancy Wilson, Dinah Washington and Billie Holliday, “Melissa isn’t copying anybody” (London Evening Standard) and most certainly has a definitive sound all her own.  Join us for an unforgettable evening of vocal jazz!

**Proof of vaccination exceptions will be made for children under 12 and people with a medical condition or closely held religious beliefs that prevent vaccination.  These guests must provide proof of a negative COVID-19 test taken within the previous 72 hours prior to entry. 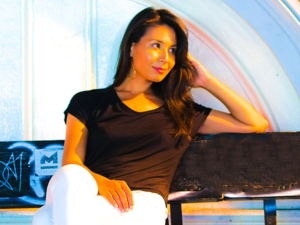 “You have to check out this voice. It is interesting. It is sassy. It is sexy,” says producer John Clayton. Brought up in the jazz clubs of New York City, Melissa Morgan has a voice that is unexpected. From the exterior you would assume a sultry lounge singer, which does make an appearance once and awhile, but from inside she contains a powerful instrument. “Prepare to fall in love” (Bay Area Reporter), and fall in love you do. On stage, she bares everything and makes you laugh while doing it. While belting a blues or tenderly massaging a ballad, she has come a long way from her appearance at the 2004 Thelonious Monk Competition. In 2009, Melissa released her debut album on Telarc Records, “Until I Met You” to enthusiastic reviews and was embraced by the jazz community as “the one we’ve been waiting for”(Dr. Herb Wong, jazz critic and historian). Downbeat Magazine included her on their 2009 Rising Star List and JazzTimes has named her “audacious and decidedly salty”. With her new album close to completion, she has gathered together her dearest friends to tell her story of the last five years, growing in the business and as a musician. While you will always hear definitive influences from Nancy Wilson, Dinah Washington and Billie Holliday, “Melissa isn’t copying anybody” (London Evening Standard) and most certainly has a definitive sound all her own.

Known as a forward-thinking musician with a passion for the jazz tradition, guitarist Randy Napoleon is an Associate Professor at Michigan State University. He is currently touring as a leader after twenty years of road apprenticeship with some of the most celebrated musicians and groups of our time.

Napoleon cut his teeth touring with pianist Benny Green, The Clayton-Hamilton Jazz Orchestra, Michael Bublé, and a thirteen year tenure with Freddy Cole. He has also performed with artists across the jazz spectrum such as Bill Charlap, Natalie Cole, Monty Alexander, Rodney Whitaker and John Pizzarelli.

Napoleon has played on The Tonight Show, Late Night With David Letterman, The View, The Today Show, and The Ellen DeGeneres show as well as TV shows in South America, Europe and Asia. He has performed across the globe at notable venues including Royal Albert Hall, The Sydney Opera House, The Hollywood Bowl, and Lincoln Center.

Napoleon has four records as a band leader with a fifth, Common Tones, released Oct 4, 2019 on the Detroit Music Factory label.

Originally from Bucks County, PA, Detroit based composer and bassist Jeff Pedraz received much of his training onstage at Philadelphia’s Ortlieb’s Jazzhaus while attending Temple University majoring in music education. He soon found himself spending more time in the club than in the classroom, playing in the house band and learning from jazz masters including drummers Mickey Roker and Bryon Landham, bassists Arthur Harper and Mike Boone and pianists Sid Simmons and Sam Dockery to name a few. It was here that a deeper understanding of jazz culture was formed and he found his musical voice and way forward.
Subsequent years were spent immersed in various scenes in NYC, Chicago and Mackinac Island, MI; and touring internationally with artists such as Pat Martino, Terell Stafford, Kurt Elling, Freddy Cole, Delfeayo Marsalis and Johnny O’neal among others. In 2012, Jeff was honored to join Chicago based group the Dennis Luxion/Michael Raynor Quartet as a jazz ambassador to Southern Africa on behalf of the US State Department, conducting workshops and performing with local musicians in a cultural exchange that was truly awe inspiring.
Jeff has also shared the stage with notable jazz luminaries such as Donald Byrd, Cecil Payne, Sheila Jordan, Barry Harris, Eric Alexander, Bryan Lynch, Dave Liebman, Richie Cole, Ellis Marsalis, Arturo Sandoval and many others. He continues to perform in major venues and festivals worldwide while maintaining a presence in the vibrant Detroit music community, where he strives to grow artistically and keep the swing alive!
David Alvarez, III, drums

David Alvarez III is a jazz drummer, composer, arranger, and music educator in Detroit, Michigan. He was introduced to the drum set at age five where he grew up playing in church. At age nine, he began his jazz education through a summer program called The Arts League of Michigan. For eight years, he was part of the Detroit Symphony Orchestra’s Civic Youth Ensemble jazz program where he was mentored by professors and students from the University of Michigan and Michigan State University. During his undergraduate studies at the University of Michigan, he was selected to be a member of the 2015 Disney All-American College Band; through this opportunity, he gained professional performance experience and participated in music entrepreneurship masterclasses. In 2017, he graduated with a Bachelor’s Degree of Fine Arts in Jazz Studies with Teacher Certification. Since then, he toured nationally with the Benny Green Trio and is currently a member of the Clayton Brothers Quintet. For the past three years, he has performed with both of these groups on The Jazz Cruise. David freelances and teaches music in Southeast Michigan.

Our Staff and Board

Community in the House